Billed as a “Certified Lunatic and Master of the Impossible,” the unusual talents of Tomáš Kubínek are notoriously hard to resist; after his sold out run on Broadway, The New York Times pronounced Kubínek “absolutely expert and consistent charming!” His internationally celebrated solo performances often include but are not limited to acrobatics, improvisation, audience participation, ukulele playing and a specially built contraption that allows him to walk with six feet. He has been described as part old fashioned clown, part Monty Python, part illusionist and entirely unique. So, just who is this Kubínek fellow? 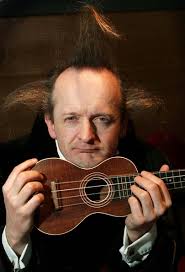 Born in Prague, Tomáš Kubínek was smuggled out by his parents at age three when the Soviets invaded Czechoslovakia in 1968. The Kubínek family was allowed to immigrate to Canada after a few months in an Austrian refugee camp and it was in Ontario that young Tomáš experienced his first circus where he was immediately hooked. A bit of a prodigy, at age nine Kubínek gave his first performance for a group of aging magicians and by age thirteen, he had an agent.

As we begin to prepare our spaces for eventual re-

We’re honored to partner with @bostonwhileblack

Today marks the one-year anniversary of the brutal