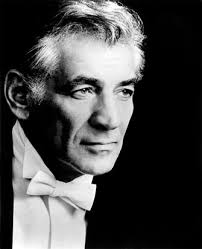 Long before Alastair Cooke became the host of Masterpiece Theatre, he made his American television debut in the long running interview program Omnibus, which featured prominent figures in the arts and sciences. Leonard Bernstein first appeared with Cooke in 1954 with his fascinating analysis of Beethoven’s Fifth Symphony. Bernstein won two Emmy awards for his shows on jazz, conducting, musical comedy, 20th century composition and Bach. Now, for the first time since their original live broadcasts, these acclaimed performances can be seen in their entirety, restored and re-mastered on DVD.

Leonard Bernstein, Reaching for the Note (1998)

No other conductor did more to bring classical music to a wider audience than Leonard Bernstein. This PBS American Masters portrait offers both a professional and personal glimpse of Bernstein’s life from his early years as a young conductor to his later triumphs as a composer while touching on his private battle with depression. Along with archival footage, revealing interviews with his brother and children as well as collaborators Jerome Robbins, Isaac Stern and Stephen Sondheim are included.

The Making of West Side Story – Leonard Bernstein (1985)

This feature-length documentary takes us behind the scenes as Bernstain records the first-ever complete recording of his masterpiece with opera superstars Kiri Te Kanawa, José Carreras and Tatiana Troyanos; it alternates between the intimacy of the rehearsal room to the final takes of beloved numbers including “Tonight,” “America” and “Maria.”

Error: Access Token is not valid or has expired. Feed will not update.