No matter how many times I have seen Woody Allen’s Manhattan, I never tire of its shimmering black and white cinematography, its equally sparkling wit and its timeless Gershwin score and possibly the best use of “Rhapsody in Blue” in a film, ever. While this comic masterpiece follows the fate of two couples as they fall in and out of love, Allen’s real love affair is with the city itself.Zubin Mehta leads the New York Philharmonic on the soundtrack, which includes sweeping instrumental versions of such favorites as “Someone To Watch Over Me,” “Oh, Lady Be Good” and “Embraceable You.” 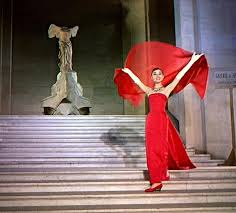 Although only four of Gershwin’s songs from his 1927 Broadway musical were included in the film version, this gorgeous MGM musical boasts Audrey Hepburn as a shy bookstore clerk and Fred Astaire as fashion photographer, Dick Avery, loosely based on Richard Avedon who actually designed the opening credits. When Astaire discovers Hepburn in a Greenwich Village bookstore, he convinces her after much protesting, to go to Paris and become his model. The unlikely opposites conveniently fall in love, but it’s awfully hard not to be charmed by Hepburn who spends most of the film cavorting all over the City of Lights in costumes by Hubert de Givenchy.

It’s hard to imagine a more romantic ode to Paris (even if it was shot in Hollywood) than the sixteen minute ballet in Vincent Minelli’s 1951 MGM musical as Gene Kelly and the exquisite Leslie Caron dance their way through an unforgettable dream sequence. The love story between an American painter and a Parisian shop girl is told partly through dance numbers choreographed by Kelly and set to the songs of George and Ira Gershwin including the classics “S’Wonderful,” “I Got Rhythm” and “Our Love is Here To Stay.”

NOW STREAMING: La Chana brings us under the skin a